Sian and Toby are away on Red Mercury helping with the collection of  Pycroft’s Petrel chicks for translocation to Motuora. Later this week some 100 chicks fly by helicopter to specially prepared burrows on Motuora. The chicks are fed by an experienced team of bird feeders until they fledge in about a fortnight. Last year all the 70 Pycroft’s Petrels translocated to Motuora fledged.

While Sian and Toby are away various members of the Motuora Restoration Society volunteer as substitute managers. It was my turn last weekend (7th-9th March). The weather was perfect so the camp ground was full. I didn’t manage to see kiwi this time but did spend some time near the new gannet colony where  two juvenile gannets (taakapu) are  only days away from fledging. These are the first juveniles to mature on Motuora since the decoys were set up in 2010.

It took me 40 minutes to photograph a juvenile flexing its wings. These are large birds with a wing span of about 2 metres and weigh about 2.3 kg. They keep their juvenile plumage for about a year and over 3 years progressively get more white and the distinctive yellow head reaching maturity after 3-4 years.

The Maori name Taakapu comes from taa ‘to strike’ and kapu ‘hand’ which means ‘to strike with hand’ an action that produces a splashing noise a bit like the sound of a taakapu hitting the water.

Gannets dive for fish and often dive vertically from 30 meters so they hit the water at a tremendous speed. Just before they hit the water they fold their wings back over their tail and a third opaque eyelid closes to protect the eye. Inflatable air sacs beneath the skin on their breast and lower neck cushion the entry shock. The image below shows the juvenile practising the backward movement of a wing. Juvenile gannet stretching wing. When gannets dive they stretch their wings behind them as they enter the water so this is preparation for diving.

It was interesting to watch these young birds as they stood for the hour or more I was at the site as they were constantly grooming and transferring their weight from one large webbed foot to another. It seems they are plucking up courage to fly. No adult birds were present as this was between 2 and 3:30pm. When these juveniles fledge they will most likely end up with other juveniles in the coastal waters of Australia returning when they are mature birds. Motuora is very dry with the water tanks at their lowest since the new tanks were installed. The pond adjacent to the water tanks has dried up and the camp ground has little green grass. 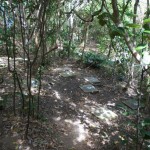 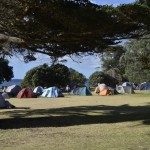 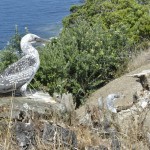 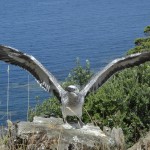 Juvenile gannet flexing wings. Only days away from fledging 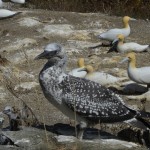 One of first juvenile gannets to survive on Motuora. Decoys in background. 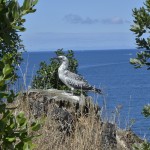 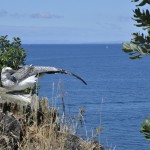 Juvenile gannet stretching wing. When gannets dive they stretch their wings behind them as they enter the water so this is preparation for diving. 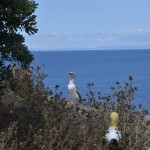 Second of two juvenile gannets on Motuora (decoy in foreground) 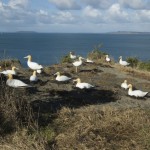 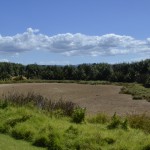 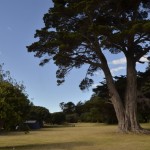 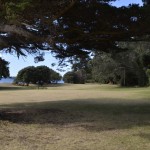